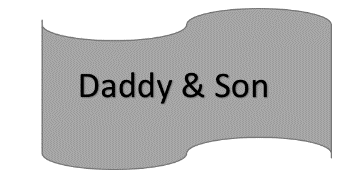 Some parents often use unkind words on their children, without caring much about the negative effects such words have on them. Researches have shown that yelling at children or speaking harshly to them negatively affects their self-esteem.

Apart from speaking unkind words and yelling at their children, some parents go as far issuing unnecessary threats too. For example, imagine a dad who lashed at his son in a very strong voice, “….I will disown you.”

That’s really unfair to the child! Forget whether the dad meant it or not, that’s not the issue here now. We know that many angry parents who threaten to disown their children never get to do so. But why use such a threat?

Truth be told, when a parent threatens to disown a child over some irregular behaviour, or for whatever reason, what comes to the fore more is the lack of a good sense of responsibility on the part of the parent than the foolishness of the child.

Apart from the negative psychological effects such words have on the child, such threats also cast some doubts on the level of maturity of the man as a father. I say this because a mature, patient and responsible parent should know better ways to handle his child’s misdeeds than to issue a threat to disown him or her over such behaviour.

An average teenager does not like to be threatened; parents ought to know better.

Truth be told, when a parent threatens to disown a child over some irregular behaviour, or for whatever reason, what comes to the fore more is the lack of a good sense of responsibility on the part of the parent than the foolishness of the child. Why would a parent contemplate disowning his own biological child, under any circumstance? Bring up any reason and I will tell you that it is not acceptable.

Whether your dad lives up to your expectation or not, he is still your dad. You don’t even have the right to disrespect him, let alone repudiate his fatherhood.

To the father, whether it appears so to you or not, your kid is yours forever; you are his dad and he is your son. Whether he behaves well or not, you belong to him and he belongs to you. I mean, he didn’t ask to be brought into the world; it was your choice and your decision. So as long as those words are true, you could not really disown him.

To the child, your dad is yours forever. It doesn’t matter that you were not consulted before he and your mum took the decision to birth you into the world. Do you realise at all that your dad was also not consulted before his own parents gave birth to him? So show some understanding with your dad, please. Whether your dad lives up to your expectation or not, he is still your dad. You don’t even have the right to disrespect him, let alone repudiate his fatherhood.

It should go without saying that no matter happens, a father should not disown his own biological child, and neither should a child disown his dad.

Several years ago, I watched on TV as ace Nigerian comedian, Tariah Basorge Jnr, told the joke of two kinds of dads who threatened their boys that they would be disowned if they continued with some certain unacceptable behaviour. I can’t recap the story with the exact words he used, but the joke sounded something like this:

The first Dad, wealthy and elitist by all means, threatened his son, “James, if you continue with this type of behaviour, I will disown you.”

James, realizing he had done wrong, replies in an apologetic tone, “Dad, I am sorry. Please don’t disown me. I promise to behave better going forward.”

Second Dad, poor and struggling to earn a living, said to his own son, “John, if you continue with this type of behaviour, I will disown you.”

John, feeling his father’s threat was inconsequential responded, “Disown me? Of what use is it being your son anyway? In fact, I have ‘defathered’ you already. When, my teacher asked us to invite our parents to the school the other day for PTA meeting, did I invite you?”

No parent has any sufficiently justifiable basis to use the words, “I disown you” on his child.

Even though the story was meant to be a joke, the implication is very serious. It is really sad how a dad and a son’s relationship degenerated to the extent like that between John and his dad. The two scenarios paint different pictures worthy of further consideration.

First, James’s response may be considered good enough whereas his father’s threat was as inappropriate as that of John’s father. But John’s response is condemnable by all means. That’s irresponsibility on his part!

10 thoughts on “Dad, You Can’t Disown Your Son; Son Neither Can You!”

This site uses Akismet to reduce spam. Learn how your comment data is processed.

Looking for Something Specific?

NEWEST POSTS ON THE BLOG